“The few who do are the envy of the many who only watch.”

My father always told me that envy was not becoming to me nor would it do me any good. “Just because so and so has (you name it here) doesn’t mean that you need to have it nor deserve to have it.” My mother grew up in a family of 10 and lived in a railcar until she went away to college. Aside from her love of fashionable clothing – much of which she sewed herself – she delighted in the simpler things in life. She did not need grandiose experiences or the next best thing to make her happy and neither did our family. Growing up with this household ethos, I learned to accept and be thankful for what our family did have. I still take a great deal of pride in being satisfied by the simpler things in life and place more importance on the relationships I have enjoyed than any possession I might acquire.

These values became even more ingrained when I moved to the Flathead Valley of NW Montana 5 years ago, but I also realized that same contentment had limited the expanse of my horizons. There was a lot more to life than I had been allowing myself to experience. I discovered a zest for doing things I had never done before – like climbing mountains and letting my wanderlust go wild. The experiences inspired in me an unquenchable desire to explore and challenge myself physically and mentally. Not only was I doing something that brought me joy but I was also meeting wonderful people along the way. The best part of this new discovery was I had become a do-er rather than the contented watcher I used to be. This new zeal extended into other areas of my life too – I found myself saying yes to things I had always just thought about doing. Singing in Choirs (plural), joining Toastmasters, pursuing my Lay Pastoral Associate license, and volunteering for various organizations and events. Saying yes can become addicting and, as I found out at one point, can quickly lead to overwhelm and burnout – but for the most part – saying yes simply opened doors to opportunities that in the past would have passed me by.

And therein lays the rub – while pursuing one profound opportunity this summer, other passions and opportunities have been passing me by. I can’t do it all. This has been a difficult reality for me to accept. Normally, I would have accumulated, at the minimum, 100+ miles worth of snow and dust on my hiking boots by this time of year but alas, I surrendered my mountain adventures to a higher calling of sorts. While my hiking buddies have been climbing to mountaintop after mountaintop and posting stunning photos all over my Facebook feed every weekend, I have either been studying or writing sermon after sermon and cramming my other duties into the few hours I have outside of work all year long. Now, don’t get me wrong. I am absolutely thrilled to have the opportunity to use my recently attained Lay Pastoral Associate license to its full extent while my pastor is on sabbatical this summer. There really is nothing I enjoy more than dwelling in the Word, writing about it, and now preaching it (I still have to pinch myself!) except maybe contemplating those words on top of a mountain.

So yes, I will make a full confession here to harboring within my soul a severe case of mountain envy.  As unbecoming as it may be, after seeing the beauty of blue skies and majestic mountains only through the eyes of my fellow mountain lovers – my home – work – church existence has been getting to me. I longed to escape, to behold what I couldn’t, to experience what I didn’t have time for – a dirty mountain trail and the endless vistas I had coveted from my computer screen.

And when I finally, FINALLY, got the chance to hike my favorite hike recently… there were no beautiful blue skies and the mountains were enshrouded in smoke. I would like to say that I sucked it up and didn’t pout – but then I would be committing yet another sin on top of envy – deceit. Recalling my friend’s (who don’t work in the summer) joyful posts from the day before – ONE DAY mind you –  showing the bluest skies I have ever seen (ok, so maybe I am milking this…) and abundant wildlife (bears and moose galore) did nothing to help quell my urge to stomp down the trail with a welt in my throat and moistened eyes. Thank goodness it was a solo hike! 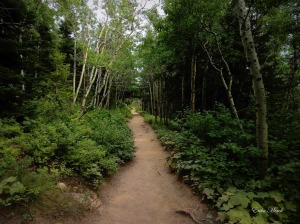 16 miles of a smoky Many Glacier day lay before me. The long, pre-dawn drive to the trail head is what kept me motivated to go on. And go on I did! Because I am doer now, remember?  Besides, it is hard to stay mad or miserable on a mountain trail (unless it is raining, then I am mad and miserable!) As I walked (note I wasn’t stomping anymore) I could feel my clenched jaw slacken and the tension between my shoulders ease. I have completed or attempted this hike three times before. The first time being the only time I actually made it to the Swiftcurrent Lookout. The other two attempts were thwarted by forces of nature I could not control. This time, the only force I had to contend with was my attitude and as it would turn out later – smoke. I determined I was not going to be disappointed again. But I still had this bitter taste of disappointment that lingered as I passed by lakes reflecting nothing but greyness and made my way up the switchbacks with repetitive views of a grey valley diminishing the higher I climbed. 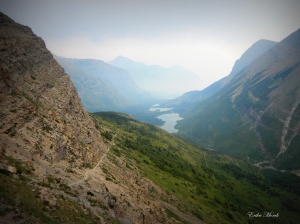 “Why, oh why couldn’t you have made today be a good day?” I demanded of God.

By the time I made it to the pass, I was in a severe depression – not because of any emotional issue I was dealing with but from the smoke wafting in the air blighting the sun and blunting out any view while telling a story of fires burning again somewhere.

Another mile straight up now and I would answer the Lookout’s beckoning. I started on my way.

“But really, why?” I kept thinking. Is this some sort of obsession I have with making it to the top? It started to rain. I turned back for a moment and then in defiance I turned around and continued on. The wind started to howl – how could it be so windy and still be enshrouded in smoke? And then my lungs began to burn and my eyes water. It was 7.5 miles back to the trailhead and I had had enough.

I sat down on a protected ledge and had my lunch as I gazed out at a darkened valley.  It was delicious. And God finally answered me.

“What makes you think today isn’t a good day?” was all He said.

Feeling a bit convicted, I took a swig of hot coffee, gathered up my gear, and glanced up at the lookout in the grey yuck above me. “I win,” I declared, “and I am going to enjoy the rest of my hike.”

With a skip in my step I made my way down to the pass where I met a couple from Texas who were freaked out because apparently a bear had been following me. 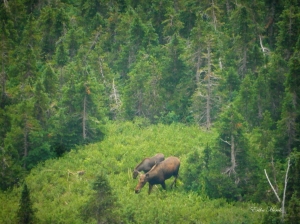 Then I saw a cow moose and her baby, and I met longtime friends who were hoping to make it to the pass but weren’t sure they could, and I found the most beautiful patch of wildflowers blooming vibrantly under the grey skies. 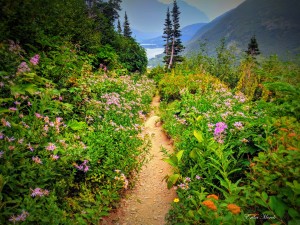 A hint of sun broke through just as I made my way down the still flowing creek bed and shone on a lone stem of fireweed. It was a magnificent photo.

Chipmunks and ground squirrels stopped and posed for me, sharptails strutted for me,  and tree branches created the perfect frame for an exquisite waterfall shot. 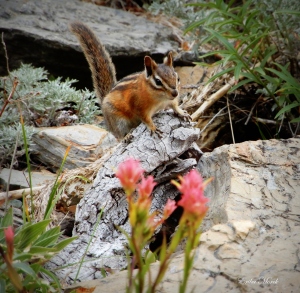 The grand finale was a majestic bull moose bathing in grey waters and putting on quite a show for my appreciative eyes. 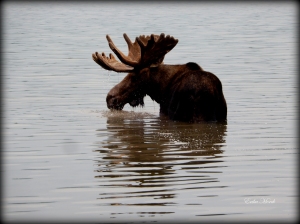 It was a good day! I laughed as the sun came out for the last 2 miles – making the forested walk glisten and the birch bark glow. I was reminded of my father’s words, “Envy is unbecoming” and added some new-found wisdom of my own – it will wreck your day. No matter how much “better” someone else may have had it, your present is all that you have. Make the best of it and you will find much more joy on your journey of being a doer. 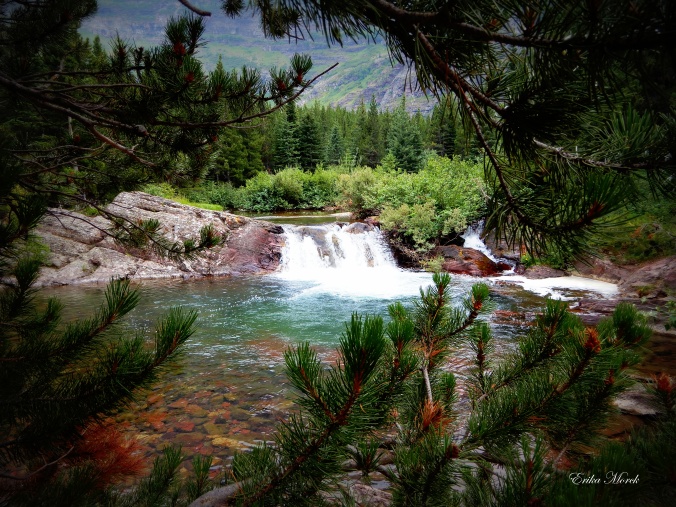