“And now, just as you accepted Christ Jesus as your Lord, you must continue to follow him. Let your roots grow down into him, and let your lives be built on him. Then your faith will grow strong in the truth you were taught, and you will overflow with thankfulness.” Colossians 2:7-9

I have been doing a lot of thinking about roots lately. And while, the lengths of the roots on the weeds I have been pulling out of my garden beds are pretty impressive and have been occupying much of my time, the roots filling my thoughts while I am busy pulling those weeds go much deeper. 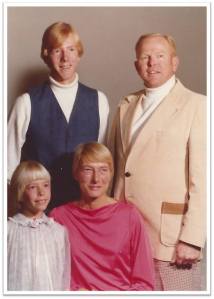 I am blessed to have grown up in a family whose ties were strong between parent and child as well as past and present. There are times I wish I knew as much about my future (or even tomorrow) as I know about the past “pre-Erika” times. I was not fortunate to know any of my grandparents well. My grandfathers had long passed away before I was born. My mom’s mother died when I was in second grade and I had only a yearly visit from her to form any sort of relationship.  My dad’s mother died when I was in the fifth grade but I only saw her one time – when I was in kindergarten – as she had suffered from Alzheimer’s for nearly 10 years, was in a nursing home, and we lived out of state. At that time, children didn’t visit people with Alzheimer’s. Nonetheless, my parents did a good job of connecting me and my brother with our heritage – both ancestral and cultural. Scandinavia was very much alive and well in our household and in our upbringing. They also ensured, that no matter where we were or what circumstances we faced, that we had a firm foundation in our faith.

We were a rather nomadic family, moving on average every 3 or 4 years with my dad’s government job. My hometown of Rock Springs, WY was only home from my birth to 8 years of age. After that home was where we made it for however long my dad’s career allowed. We saw a variety of the country and I am a better person for it, but for me, being rooted meant being rooted in relationship – not place. My parents knew that too – all said, my parents had moved 23 times in their marriage before they finally retired to Billings and made that their final home.

It was there that we finally planted roots of place and established a place we called “home.” Indeed, it was the one place (except for my brother who moved there after we did) that we had all lived for the longest period of our lives. For a family who was used to the transitory lifestyle, we quickly planted roots – deep ones – and for the first time in my life I felt the certainty of place.

I relished that certainty of place for 24 years. As you might imagine, moving to the Flathead 4 years ago, leaving my family and friends behind, was a pretty bold and daunting endeavor for me. However, I can honestly say I have grown more in heart, mind, and character in the last 4 years than I did in the entire 42 leading up to my move here.  I had secured a good job before coming (thanks Joe!) so I had some form of security when I arrived, but not much else.  I worked hard to integrate myself into the community and make new friends here. My little nest of an apartment kept me safe (although not always warm) and saw me through a lot of life – more than I ever expected to live through when I arrived. Times of sadness with the deaths of my dog and both of my parents, times of heart break, and times of frustrating illness along with times of immense mountaintop triumphs and the joys that come with living life fully, discovering my sense of self, and finding “my place” in this world.

I don’t think it is a coincidence at all, that I as I closed the door to my little nest of an apartment (it was a lofty 600 sf!) one last time – a place so full of personal discovery – that I would at the same time be forever severing the physical ties to my home of 24 years back in Billings. The belongings of my family’s past were sold in an estate sale last weekend and my “home” is now where I choose to make it – right here in the Flathead – which I did with the recent purchase of my first home.

The last time I stood in my home of over 24 years I had just laid my dad to rest 2 days prior. Despite the emptiness that surrounded me then, I found consolation in the familiar accessories and necessities that had followed my family from place to place – treasures from before I was even born.  There was a sense of normalcy seeing Dad’s executive desk strewn with various medical bills and memorial preparations; his beloved Ivan Doig books, Golf magazines, and Bibles that helped occupy his time still scattered about; dusty duck decoys; family portraits; treasured artwork; shoes tossed to the side; Dad’s walker propped against the wall; the living room furniture that held us through the best and worst of times – it was in the heart of our home where all our celebrations came to an end and as that week of sorrow 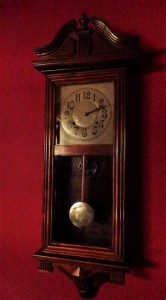 came to a close, served as a sentimental time capsule of comfort – a collection of our very good life lived as a family and the last days of Dad’s life at home.  The older-than-my-dad grandfather clock which had withstood the flames of a barn fire and Morck family formation still ticked away the day and our Baldwin upright beckoned me to play one more song, though time would not allow. I had glanced around making sure I hadn’t left any of my belongings from the “week of death” behind, closed the front door, and hit the road. I didn’t know that it would be the last time I would ever see our home as home. I didn’t know that time capsule of comfort would only be saved to memory by a fleeting glance as I rushed to be on my way. I presumed I would be back for at least one last visit, one more living room session of sentiment, but as fate would have it, that wasn’t to be.

Seeing the house again, this time prepped for the estate sale with the contents of our family’s past marked at fair market value, was jarring to say the least. Treasures from my childhood, treasures I hadn’t seen in years were now on display – staged for effective sale in ways they were never meant to be. Gone was our homey kitchen and table that had served up so many family suppers and arguments.

Gone was the cozy living room where Dad and I had that last cherished father-daughter talk late into the night on Thanksgiving. As fast as our lives fell apart in the ensuing months of illness and death, this place had always been a haven, a sanctuary of sentiment. Now it was just a stage from which the contents of our life would be sold.

I had driven to Billings the night before the estate sale was to start and arrived around midnight. My intent to make a fast perusal of the place to garner any items I may have missed putting aside after my dad’s funeral quickly came to a halt. Thoughts of what I might need or use in my new home suddenly seemed acerbic. The items before me had lost their value to me –  as I realized what made them treasures were the people who treasured them, not the items themselves. Rather than checking off my mental list of necessities I could grab (and save a buck – owning a home is expensive) I stood there and cried as I realized and remembered all I had lost. Aside from a few heirlooms and the prized and once lost Danish plates that the estate sale professionals found in their staging, not much would be coming to my new home with me. 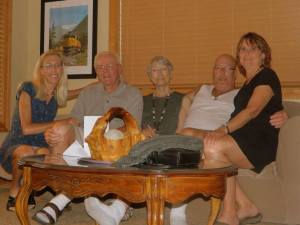 I believe God has brought me to a very purposeful chapter in my life. It is time to start anew. Until now, I always had Billings as a fall back, a safety net, the home where I was always welcome. Now it is all up to me. For so long my life has been in two places on separate sides of the state.

It is hard to put down roots when you don’t know where home is. Until now, I was ok with that. Being rooted has consequences; it means you are claiming an identity of place. For four years I have struggled to claim where that place would be. How could I when “home” was still in Billings but I was here?

At some point on this year-long journey of grief book-ended by the deaths of my mother and father, I began to sense that the soil in the Flathead was fertile soil, a good place to plant roots. It is here that I will embrace the life God has called me to and truly live life – not live it in limbo. For too long I have been on an unrelenting quest to reshape my existence but never claiming it as my own. No longer. Now, as Danish philosopher Søren Kierkegaard said: “Now with God’s help, I shall become myself.”

Now with God’s help, I shall find home, and in faith not in relics of the past, plant new roots.

2 thoughts on “Of Relics and Roots”