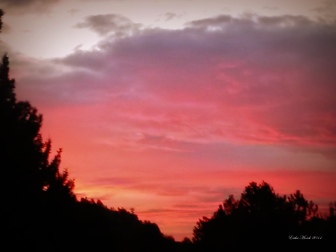 “But those who trust in the Lord will find new strength. They will soar high on wings like eagles. They will run and not grow weary. They will walk and not faint.” ~ Isaiah 40:31

Eastern Montana sunrises can be spectacular and for the most part counted upon to make an appearance at least once, twice or more in the span of seven days. Much unlike the skies of the Flathead Valley in winter, the winter sunrises on the Montana plains have a way of bringing a fiery warmth to the frigid landscape. Of course, there is a trade off for those expansive skies in the way of no mountains to climb, air so cold it instantly freezes the snot in your nose, and the incessant presence of wind. I often wondered if the wind from the west was trying to blow the sun down as it rose in the east, a battle of strength that would continue throughout the day intensifying as the sun rose higher in the sky.

Nonetheless, spectacular sunrises have been a much-loved companion on my morning sojourns for the majority of my life; but since I relocated to the Flathead, their infrequency in the winter leaves me wanting and makes them my most sought after photography subject. To me, sunrises reflect the promise of new life every day, the significance of which is tantamount to my life story. Sunrises remind me that the day is beginning anew, fresh and full of life. Sunrises call me to a day that is waiting for me to meet its opportunities and challenges with renewed vigor.

Being a sunrise chaser I am also an early riser. I have been for most of my life. If I over sleep on prime sunrise days, I feel cheated. My early morning runs usually begin in the dark so I can be at just the right place to capture the sun as it rises. This in itself is a science, monitoring the time each day the sun breaks over the mountains, timing my departure, and setting my pace to match. There have been times I have found myself in the trees or other setting devoid of any photographic value racing the sun to my destination. This can be exhilarating and even panic inducing if I know the sky is going to be at its prime color quotient and I am not at my chosen spot to capture it. All of this illuminating information is just a little background on my love affair with the sky and her importance to my morning ritual.

There was a time however when the sky put forth a far less welcome companion on my morning walk that became a startling harbinger of my new life to come.

The early morning sun finally rose above the horizon and I rejoiced in the warmth of the soft rays at my back. My Sunday morning walk took me to the last bit of open prairie under the iconic sandstone rim-rocks and past the massive Mormon temple with its wrought iron gates that were at once incongruous to the prairie setting and magnificent to the eye. The temple’s park-like grounds were in full bloom and its white washed walls held a pinkish hue in the morning light. This was my favorite spot to wander to and this would be my final Sunday morning walk in the Magic City.

I was surprised at the chill that lingered in the air. Mid-August mornings in eastern Montana were usually warmer and I had dressed with that warmth on my mind- donning my usual short sleeved marathon tee and running shorts. Now I was searching for pockets that did not exist for hands numbed by the cold.

Despite my chill, a sweet peeping sound and a chorus of meadowlarks and chickadees serenaded my thoughts while the painted sky mesmerized me. It was a perfect prairie morning causing an emotional lump to form in my already tight throat. After a week of good-byes, I wondered if I could cry any more tears, and yet I knew the events of the coming day would open the floodgates wide. This morning’s meandering was a time of meditation; preparation for letting go of the windswept prairie that beckoned me so often; and letting go of all that I had clung to for stability for the past 24 years. Today I was leaving my second family, the family that nudged me from my shell and showed me how to fly as a leader in times of controversy and chaos. I was saying goodbye to my church, the place on which I sought refuge when my own world was more than I could bear. I was leaving the people who believed in me, much more than I believed in myself, I was leaving the place where I experienced the greatest of joys and deepest sorrows my life had ever known.  I was saying goodbye to the place that for 10 years had been what gave meaning to my life.

A screeching noise startled me out of my contemplation and caused the hairs on my arms to rise even more than the cold.  Bobcats preyed out here, had there been a kill? Something brushed by me, unseen but eerily felt from behind.  The bird melody stopped and the screech came again. This time I saw it from the corner of my eye. A hawk, with a wingspan as wide as I was tall, was flying right through the wrought iron fencing and coming straight for me. In shock I froze as the brownish white feathered missile brushed my shoulder and lifted to a nearby rock outcropping.

Cursing aloud, I quickened my pace and glanced over my shoulder to see the crazed hawk coming at me from behind at chest level.  With my heart pounding, I started to run but I could not get away. I flung myself towards the ground, crouching with my arms and head tucked tightly to me. The hawk flew over me with vicious, outstretched talons on legs as wide as my wrist. Visions of my bloodied face, arms, and legs flashed before me. I staggered up, completely disconcerted by what was happening.

Again, the hawk raced at me, this time coming full throttle at my face. I screamed and with my arms flailing in the air, I ran with complete abandon and all my might not knowing where to run to but running as fast as I could. I made it around the temple grounds and saw the hawk soar through the iron fencing towards me.  With nowhere to take shelter, I cried out in terror and raced to a nearby road before I felt my legs giving out and began to feel sick in my stomach.

The screeching stopped. All I could hear was my heart pounding and my lungs gasping for air. I turned towards home on trembling legs, my stomach in knots and my senses aware of every movement about me.

All I could think of at the time was how ironic it was that, as I was preparing to leave the familiar safety of the proverbial nest and the sacred place that was my second home, I would be attacked by a hawk!

Little did I know of the symbolic meaning my encounter with the hawk that morning held; that understanding would reveal itself to me along the way of my journey to a new life in the days to come.

Much as the sunrise is symbolic of a new beginning, I learned that encounters with hawks have their own symbolic meaning. The multitudes of stories I found on the internet from people seeking the meaning behind their own encounters with hawks overwhelmed me. Truth be told however, their experiences seemed far more placid than mine! It is said that if a hawk has soared into your life, it means you require a higher perspective. The hawk’s sudden presence indicates that you are awakening to your sole purpose, your reason for being here. Having the keenness of eye as the hawk helps you to see the details of what is going on in your life from high above, you see things in the bigger picture. In essence, the hawk can teach you how to fly high while keeping you connected to the ground.

Believe me, I certainly did not equate my horror-movie “Birds” like experience that morning with awakening to my sole purpose, but looking back, perhaps what the hawk was trying to do was pull me from my sad reflections on what I was leaving behind and elevate my thoughts to the new life that was unfolding just as fresh and new as that final Sunday morning sunrise promised the day to be.